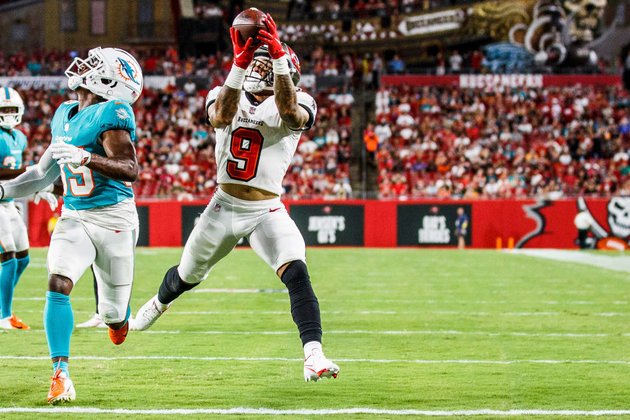 Tampa Bay BuccaneersJerreth Sterns, college football’s most productive receiver in 2021, disputes that he is a ‘small receiver’ and his production, including a strong NFL debut on Saturday, backs that upScott Smith

When you catch 150 passes in a 14-game season, it's pretty clear you don't miss anything thrown your way. For Jerreth Sterns, that currently includes his first NFL opportunity.

Sterns grabbed that opportunity smoothly on Saturday night when he made his professional debut for the Tampa Bay Buccaneers, with whom he had signed as an undrafted free agent out of Western Kentucky in May. Sterns is coming off a remarkable 2021 season in which he won college football's receiving 'Triple Crown,' leading the nation in catches (150), receiving yards (1,902) and touchdown receptions (17).

By choosing to sign with the Buccaneers, Sterns put himself at the bottom of a long ladder, as he joins one of the NFL's most loaded receiving corps. However, due to injuries and/or coaches' decisions, the Buccaneers played without Mike Evans, Chris Godwin, Julio Jones, Russell Gage and Breshad Perriman on Saturday, there were plenty of snaps to go around. It also helped that the Bucs controlled the clock for 34 minutes and ran 71 plays to Miami's 45.

Third-year man Tyler Johnson was essentially the most experienced receiver available and he was the top target in the first half, finishing with a team-high six catches for 73 yards. Sterns played extensively in the second half, though, and contributed four catches for 51 yards, including arguably the two biggest grabs of that half. He wasn't thinking about his stats in the moment, though.

"I wasn't really worried about that at the time, I just wanted to win going into the game," said Sterns. "It was cool with all that happening and everything. I've been dreaming about playing in the NFL since I was seven years old, so it was just a blessing to even be on that field."

With the Bucs trailing by nine midway through the third quarter, Sterns lined up in the left slot on first down from the Miami 19 and ran a route that took him across the goal line and towards the goal line. He pulled the home team within two points with a silky over-the-shoulder catch with a defender on his right hip. Sterns later gave most of the credit on the play to second-year quarterback Kyle Trask.

"We had a little slot-fade from the inside and I released outside and Kyle threw a perfect ball," he said. "I didn't really have to do much, just put my pinkies together."

Late in the fourth quarter, with the Bucs facing a do-or-die fourth-and-12 at their own 31, Sterns ran a deep over route and found a gap in the zone coverage to haul in a 20-yard pass. That kept the drive alive and it eventually led to a shot at a game-winning field goal, though Jose Borregales's kick hit the right upright as time expired.

"I mean, he's smart and he's tough," said Bowles. "He was hurt in the spring so we really couldn't see him. He came back this camp [and] he looks great. He's a very intelligent receiver. Again, he caught a lot of balls in college. He knows all the positions and he took advantage of his opportunity."

Given his mindboggling stat line from last season, there was clearly some reason that Sterns slipped through the draft, and it's not hard to pinpoint. He is listed as 5-9 on the Buccaneers' roster but he pegged himself at 5-7 on Monday after practice. However, Sterns calmly disputes the notion that he is a 'small' receiver.

"There's a lot of things that go into being drafted besides production, and I know that," he said. "I'm just happy to be where I'm at and I couldn't ask for a better opportunity. I don't really think I'm small. I'm short, for sure. I'm 5-7 but I'm a bigger guy. I probably weigh as much as most of our DBs; I'm like 190. I don't think size is an issue."

Bowles agrees that Sterns plays much bigger than his height and that he has the physical tools and the attitude to handle the NFL.

"There's a bunch of them in college nowadays, those type of receivers - quick, shifty, fast," said Bowles, whose team also signed the 5-8 Deven Thompkins and the 5-10 Kaylon Geiger as undrafted rookies. "But he's tough also. He'll put his neck in there and block. And he'll play some special teams, so we'll see him the next two weeks, see how he does."

When asked what he could do to make the regular-season active roster, Sterns mentioned being consistent from day to day and finding a role on special teams. Those are the exact sorts of goals that his coaches would want him to have, and he's taking a steady approach to achieving them.

"I'm just trying to take it one day at a time," said Sterns. "I just get to learn from some of the best to ever do it. I just try to take in what those guys say and just mimic what they do and how they approach practice and in the meeting rooms every day." 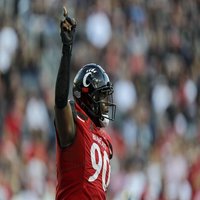 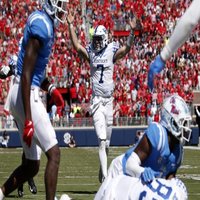 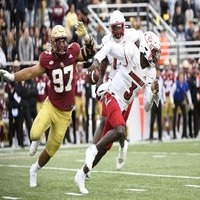 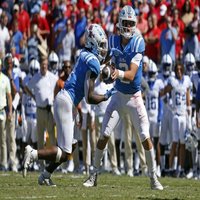